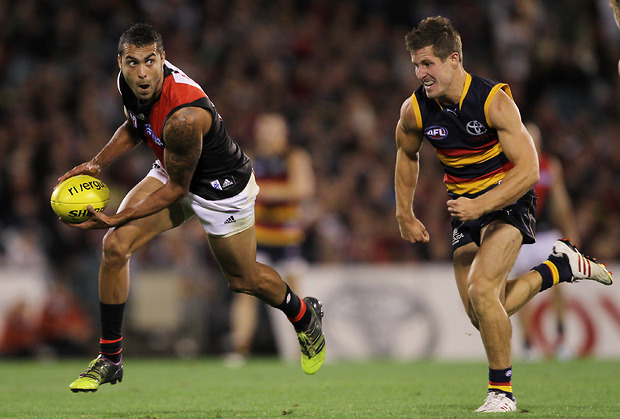 Saturday night at Etihad this week sees the stumbling Bombers come up against a revitalized Adelaide Crows.

The Bombers are coming off a disastrous loss against Melbourne in a game they dominated in every way, other than on the scoreboard when the final siren rang. Most tellingly they had almost double the amount of inside 50′s of the Demons, along with 9 more scoring shots, but lost by a point. Get the feeling goalkicking practice would have been high on the agenda at Tullamarine this week.

David Zaharakis was exceptional for the Bombers, nearly saving a game they should have won with two late goals to put them back in front with just a minute or two to play, before the Demons were able to sneak the game winner courtesy of first year player Christian Salem. Brendan Goddard was also one of the best for the Dons but would no doubt be ruing a couple of missed shots on goal normally gobbled up by a player of his kicking ability.

The Crows on the other hand are coming off a stirring win over the Kangaroos at home, bringing their record for the season to an even 6 wins and 6 losses – exactly the same as the Bombers. Small forwards Sam Kerridge and Eddie Betts fired for the Crows in their win booting 4 and 3 goals respectively, while Brodie Smith continued his stellar season with a best on ground performance off half back. Perhaps the thing Crows fans will have enjoyed the most however was the continued progression of key forward Taylor Walker, who looks better every week in his return from a knee reconstruction and appears ready for a big game against the Bombers.

If Essendon are to bounce back they will have to do it without small forward Paul Chapman who has been rested, and young key back turned forward Jake Carlisle who goes out with a knee injury. Carlisle’s loss could make things difficult for the Bomberss defense against the key forwards of the Crows including Walker and former Cat James Podsiadly, however Dustin Fletcher comes back in to help cover for Carlisle’s loss. Also into the side comes young speedster Travis Colyer, who despite obvious talent has struggled to hold a senior place. Often played as a substitute, he’ll be hoping to avoid the green vest this week.

The Crows have made just one change, bring in Jarryd Lyons for youngster Matt Crouch.

The game as usual will be played against the backdrop of the Essendon Supplements saga, with the Bombers players this week being granted an extension on responding to their show cause proceedings until July 11. What toll the constant pressure of the saga has on the team from week to week is anyone’s guess, though both Zaharakis and Goddard said this week that it really doesn’t effect them on the field.

This should be a fiercely fought contest given the teams are only one position apart on the ladder in 9th and 10th. The winner could finish the round in the top 8, while the loser will find themselves falling further out of the finals race. The Bombers should have the edge at home, but there shouldn’t be more than a couple of goals in it either way.