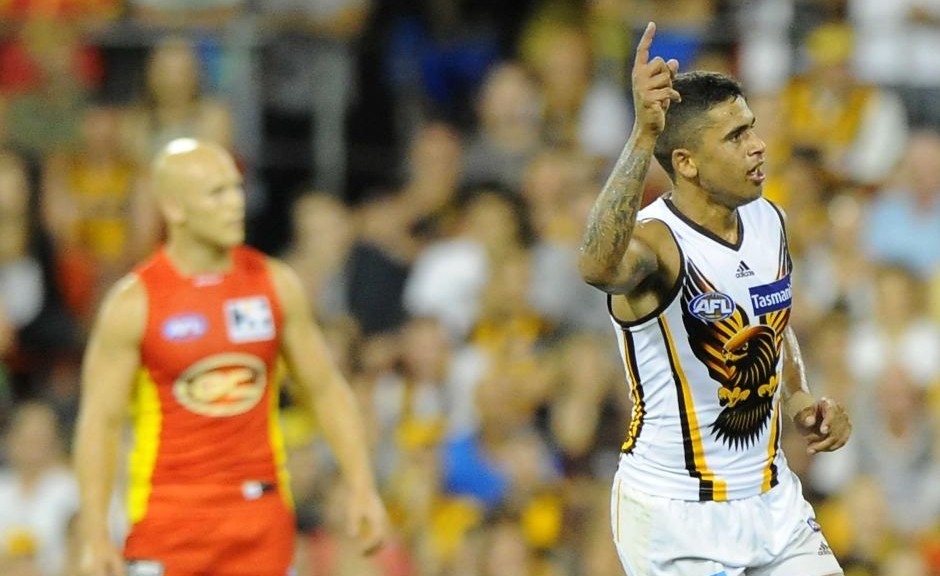 Saturday afternoon sees Hawthorn taking on the Gold Coast Suns at Aurora Stadium in Tasmania.  The 2nd on the ladder Hawks are coming off a strong win over Collingwood, their 10th for the season.

The 29 point win came on the back of another 4 goals straight from Luke Bruest whose amazing accuracy in front of goal has taken his season tally to an incredible 35.4 for the season.  Brad Sewell has regained some of his best form after being asked for more by his coach recently, while Luke Hodge and Grant Birchall were also among the best.  Ben Stratton comes back into a team getting back close to full strength for this weeks matchup with the Suns – only Josh Gibson, Sam Mitchell and the long term injured Brendan Whitecross are still missing from the Hawks best 22.

The 8th placed Suns are also coming off a strong win this time against Geelong, in a result that Suns coach Guy McKenna described as a ‘fork in the road’ for the fledgling club.  After a favorable early draw the Suns had recently started to struggle with 3 losses in a row prior to last week, so the win over the Cats was a much needed steadier as they fight for their maiden finals birth.  Their 8th win of the season keeps them a game clear of Essendon in the finals race.

Jesse Lonergan comes back into the Suns lineup this week at the expense of small forward Brandon Matera who has a groin strain.

On what promises to be a typically cold and wet winter afternoon in Tassie the Suns will need to be at their very best if they’re to keep up with one of the premiership fancies in the Hawks.  The two teams do seem closer together than last time they met however, when the Hawks handed the Suns a footy lesson at Metricon Stadium to the tune of a 99 point hiding.  If the Suns are to cause the Hawks some problems it could be with their trio of tall forwards in Dixon, Sam Day and Tom Lynch; the Hawks still look a little light on for key defenders without main man Josh Gibson.  The midfield battle also promises to be an exciting one, with Ablett and young guns Jaeger O’Meara, Jack Martin, Swallow and Prestia forming a combination that will scare teams for several years to come.  They’ll take on the wealth of experience in the middle for the Hawks in the shape of Jordan Lewis, Shaun Burgoyne and Brad Sewell, with skipper Luke Hodge no doubt spending some time in there.  Add in the speedy Isaac Smith and Bradley Hill and it’s a matchup that promises plenty.

The Hawks should be able to handle the Suns, but expect a better showing out of Gold Coast than the last time the two met.