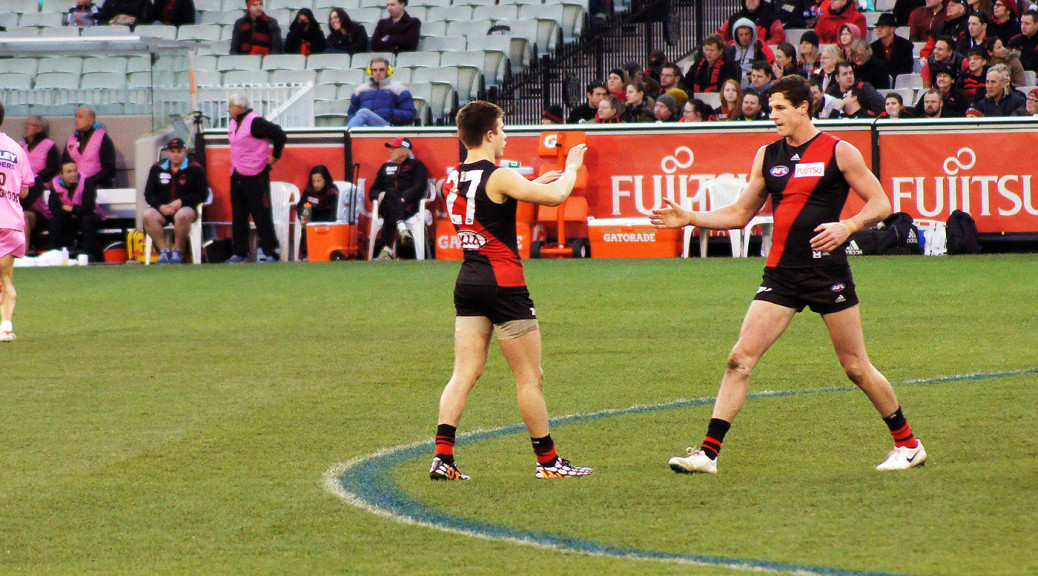 Who saw this coming?

It’s not that we’re shocked that Essendon won, but the ease with which they disposed of Collingwood in a 64 point drubbing in front of just under 59,000 fans was certainly a surprise.  The win was big enough to lift the Bombers above the Pies on the ladder, 10th before the game started Essendon are now 7th on the ladder and are focusing on moving further up rather than worrying about those behind.

The domination started right from the first bounce, the Bombers had 3 goals on the board before the Pies had their first thanks to Patrick Ambrose, Paul Chapman and Jake Carlisle.  The Pies steadied midway through the first quarter and dominated possession for about 10 minutes, leaving the game evenly poised at quarter time.

And that, as they say, was that.  The Bombers dominated from quarter time onwards, 4 goals 1 to 2 points in the second quarter meant that the contest was nearly over at half time with the Bombers 31 points up, and a couple of quick goals early in the third quarter ended it for good.  Essendon would eventually run out 64 point winners, and but for some wayward kicking in the last quarter it could have been much more.

The contest might have been over early in the third quarter, but it may well have been lost at the Lexus Center selection table.  The decision to leave out key defender Lachie Keefe would prove costly, with both Joe Daniher and Jake Carlisle looking dangerous in the air early, former skipper Nick Maxwell was unable to handle either leaving youngster Jack Frost exposed, though Frost battled hard.
While Daniher would fade a little to be only a solid contributor, Carlisle’s game was stunning.  An incredible 19 marks, including 8 contested, to go with 26 possessions and 4 goals mean there haven’t been too many better games played by a key forward this year than that.

For all the talk of Carlisle and Daniher’s struggles as a forward tandem they are 9th and 11th in the league this season for contested marks respectively and at just 22 and 20 years of age they have talent to burn.

Another youngster going places in a hurry is Zach Merrett, who may have already moved passed brother Jackson in the pecking order at the Bombers.  That’s no slight on Jackson who is a very talented young player himself, more a statement of just how good 18 year old Zach looks.  If he hadn’t already been nominated for the Rising Star he would have been tomorrow, 24 disposals and 2 goals including a classic dribble off his non preferred right foot from the boundary line highlighted a cracking game from the speedy forward come midfielder.
Patrick Ambrose also had one of his best games for the club kicking 3 goals.

It’s worth highlighting the age of all those players just mentioned, as they are part of a host of very talented youngsters on the Bombers list, a fact that has seemingly gone a little under the radar this season.
The Merrett brothers, Daniher, Carlisle, Dyson Heppell, Patrick Ambrose, Jake Melksham and Travis Colyer are all 22 years of age or under and all had a role in the demolition of the Pies, while a large number of other talented youngsters currently in Essendon’s VFL team have played their part in the senior team this season including Elliott Kavanagh, Martin Gleeson, Kurt Aylett and Jason Ashby among others.

It wasn’t all kids doing the damage though, veterans Paul Chapman (3 goals), Dustin Fletcher (26 possessions and 13 marks) and Brent Stanton (32 possessions) all had outstanding games, while forward turned quarter-back Jason Winderlich patrolled the back half in place of suspended Brendan Goddard and injured Michael Hibberd. Chapman’s return to form will have been particularly welcome to coach Mark Thompson, after a strong start to the season the former Cat has been struggling in recent times but was back to his brilliant best on this day.
Patrick Ryder dominated Jarrod Witts in the ruck, Michael Hurley comfortably had the better of first Tyson Goldsack and then Jesse White, while Cale Hooker continued his fine season by completely shutting out Pies key Travis Cloke.  David Myers too deserves credit, the former high draft pick has stepped up in the midfield since skipper Jobe Watson went down and his big frame was pivotal in many contested situations in this game.

We haven’t really talked about the Pies yet for a simple reason, as good as Essendon were the Pies were equal parts awful and barely had a winner at any position on the ground.  Steele Sidebottom was easily his team’s best, Dayne Beams was good and skipper Scott Pendlebury was OK, and that was just about it.  Far too many were convincingly beaten by their Bomber opponents, and for some it’s becoming a worrying trend.
Cloke is horribly inconsistent often from minute to minute and was comprehensively outplayed by Hooker, unable to even get his disposal count into double figures.  Jesse White doesn’t do enough to pick up the slack when Cloke is down, meaning the Pies have some real concerns in a forward line that hasn’t functioned well all season.
Dane Swan is a champion of the game, but his numbers are way down across the board on his output over an outstanding last 5 years or so.  He’s had some big games including on Anzac Day against these Bombers, but he was dreadful in this one.

All this was with an Essendon team missing arguably it’s 3 best players in Watson, Goddard and Hibberd – though fans of Heppell may disagree after another great performance from the youngster.
Makes you wonder what kind of a mess they might have made of the Pies with those 3 in the team.  Goddard certainly and Hibberd most likely will be back next week as the Bombers take on the Western Bulldogs, while skipper Watson has started running and will no doubt ramp up his rehab with finals in mind.

Who wants to meet this Bombers team in September?

The Pies meanwhile have now lost 4 of their last 5.  They’ll be thankful for the split round giving them two weeks to recover before they face an Adelaide Crows team who will be desperate to fight for the Pies current 8th place on the ladder.
They are in real danger of missing the finals for the first time since 2005 with a run home that includes Adelaide, Port Adelaide, West Coast away and Hawthorn.