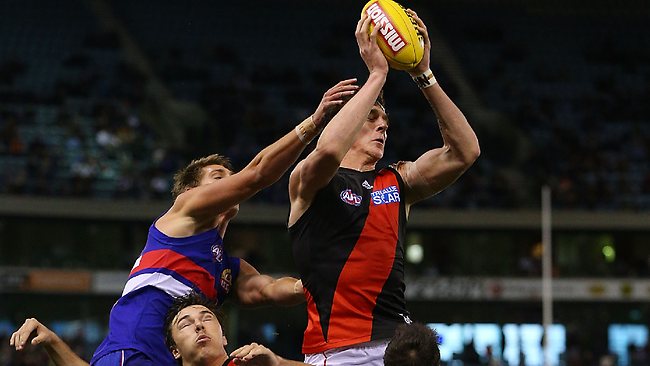 Sunday evening saw the Western Bulldogs fall agonizingly short in a game against Essendon that they probably should have won.  A touch of extra class from the Bombers and a stunning performance from key forward Jake Carlisle would be the difference in the end, but not before the Dogs gave the Bombers an almighty scare for the second time this season.

The game started according to the script, Essendon looking by far the better team for most of the first quarter, with only some sloppy uncharacteristic errors from a rusty looking Michael Hibberd and veteran Dustin Fletcher handing the Dogs a few late goals to keep them in the contest.
The second quarter started much the same way, the Bombers making the majority of the play with the Bulldogs pressuring them into mistakes and capitalizing with goals.  Midway through the quarter however the Bombers started to second guess their quick play and got caught slowing the game too much at times, going back over the mark rather than moving the ball on quickly as they do when at their most dangerous.  Despite having a dominant key forward in Carlisle who was marking the ball virtually every time it got near him the Bombers were reluctant to play through the Bulldogs pressure, and it led to a momentum shift in the game.  Despite staying close throughout the first half the Bulldogs really started to take control of the contest late in the half and were well on top despite only leading by 7 points at half time.

Dogs pup Jake Stringer had been a thorn in Dustin Fletcher’s side to the point of Fletcher eventually being moved forward.  Stringer would finish the game with 5 goals in a fantastic performance, with another youngster Marcus Bontempelli booting 2 to half time.

The Bulldogs dominated the early part of the third term and really should have been further in front than 13 points at 3 quarter time.
Another young Dog Jackson Macrae continued on from his 43 possession effort last week, and would end the game with 32 disposals and a goal.  When the Dogs kicked the first of the last quarter to get the lead back out to 21 points the contest looked almost over, but sadly for them it wasn’t quite.  The Bombers suddenly reverted to their more attacking style of play and began to take chances.  Players who had been well held for much of the night began to get more involved in the contest, with 3 in particular stepping up to join Carlisle in dragging their team back.

Dyson Heppell had been well held for much of the night by Dogs youngster Mitch Wallis, but Wallis’ rolled ankle allowed him some freedom which he clasped with both hands.  He’s an outstanding player Heppell, but the 21 year old might be an even better leader going forward.  He was joined in the big turnaround by ruckman Patty Ryder who started to dominate Will Minson in the ruck contests, combining 18 possessions and 2 goals with 35 hit outs.  Ryder is quietly putting together a very solid season.
Finally Paul Chapman, who’d had an extremely forgettable game to that point, was able to step up late and gather some key last quarter possessions, kick a vital goal and setup the eventual matchwinner for Jason Winderlich to convert.

But despite all that, this game was all about Carlisle, just as last weeks was.  He kicked 8.2 in this one and it probably should have been more, missing one of his easiest shots of the night in the last quarter, and showing he’s still got a few demons around his goalkicking by giving off a couple of very kickable shots.  Not that kicking 8 is anything to be sneezed at, nor is taking 12 marks,  his efforts tonight mean he’s taken an amazing 31 marks and kicked 12 goals in two weeks – with the early part of the season when he was seemingly on the brink of being dropped most weeks seeming a long time ago now.

In the end Carlisle’s superb individual performance was enough to get the Bombers over the line and keep their finals hopes firmly intact as they head into a week off before a marquee matchup against the Swans in Sydney in round 19.  Cale Hooker was his usual assured self after spending some time in the forward half early in the game, and Michael Hurley continued his solid form at center half back, setting up a number of attacking opportunities for his side.  Brendan Goddard and Michael Hibberd both had poor nights but should both be better for the run after missing last week for Goddard and the last couple for Hibberd.

The Doggies should also go into their own bye round with confidence before facing the Hawks, albeit disappointed that they somehow let this game slip from their grasp.  Skipper Ryan Griffen returned this week and gathered 28 disposals and he too should be better for the run, as should Brownlow Medalist Adam Cooney who had little impact in his return game as a late substitute.
Macrae, Bontempelli, Liberatore and Stringer might all be guns, while others like Lachie Hunter, Nathan Hrovat and Wallis continue to show good signs and veterans Matthew Boyd and Bob Murphy are ever reliable.  The Dogs problems are the same ones they’ve had for many years, the inability to find key position players at both ends of the ground.  Stewart Crameri was again unable to have any impact against his former club up forward, while neither Jordan Roughead nor the undersized Dale Morris could handle Carlisle.

Still there’s plenty to like for both of these teams going forward, the young Doggies continue to grow while the Bombers again showed the ability to grind out a win despite not playing their best football.