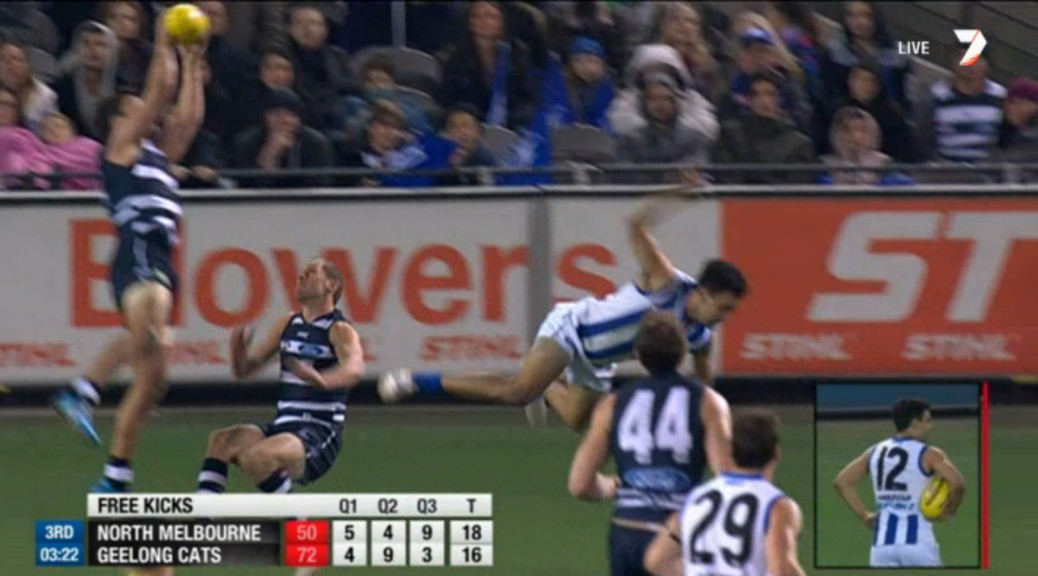 Geelong has moved ahead of Fremantle and at least temporarily Hawthorn into second place on the AFL ladder following a convincing 32 point victory over the Kangaroos in front of 32,564 fans at Etihad Stadium on Saturday night.  After a tight opening the Cats blew the contest open with a 6 goal to 1 second quarter, and although the Roos would challenge in the 3rd quarter the gap proved to be too great.

Geelong were led brilliantly by Allen Christensen in just his 5th game of an injury interrupted season as he collected 29 possessions and kicked a goal, Mitch Duncan had 24 disposals and kicked 3 majors in an impressive performance while Tom Hawkins won his battle with Scott Thompson to kick 3.  Skipper Joel Selwood continued his stellar season with another great performance to be among his sides best, while Josh Caddy backed up from a great game last week to look dangerous forward, finishing with 2.2.

The Kangaroos started the better of the sides and opened up a 14 point lead early in the first quarter, but that was as good as things got for North as the Cats would kick the next 6 goals to take a lead they wouldn’t relinquish for the remainder of the night.  The Kangas largely had themselves to blame, wasting several chances in kicking 3.10 in the first half, and as the saying goes bad kicking is bad football.
They also suffered from some ill-discipline giving away several off the ball free kicks in the first half resulting in a couple of Cats goals, though it has to be said a couple of them appeared extremely soft in the context of the game.
The Roos did manage to mount a strong comeback to close to within 10 points late in the 3rd quarter before Geelong steadied with a fortunate goal – a Stephen Motlop shank landing in the arms of Mitch Duncan in the goal square to kill all of North’s momentum just before the 3 quarter time siren.  Two quick goals early in the last quarter to the Cats ended the contest completely, and North were fortunate not to lose by more as they kicked a couple of late goals to keep the scoreboard respectable – percentage could be vital in their battle for position in the lower part of the top 8 meaning they couldn’t afford a big loss.

For North Melbourne Levi Greenwood put in a solid four quarter effort to finish with 25 possessions and a goal, ruckman Todd Goldstein had the better of his duel with Dawson Simpson who was a late replacement for former Roo Hamish McIntosh, and Lindsay Thomas kicked 3 goals in an interesting contest with veteran Cat James Kelly who was playing his 250th game.  Thomas had some good moments, but a dive in the third quarter when he threw himself theatrically forward after a slight touch on the back from Kelly wasn’t one of them.  The free kick was probably there, but the ridiculous dive from Thomas won’t have gone unnoticed by the umpires after the game and might cost him some free kicks going forward.  The AFL have the power to act on staging, it’s probably time they did.  Their have been some worrying signs recently and were other examples of it in the Sydney Essendon contest on Friday night, so it might be time for a reminder from the league that it isn’t acceptable.

The Kangaroos will need to rebound quickly given just how tight the ladder now is between 6th and 12th, they face GWS in a game they should win handsomely next week but have made a bad habit of dropping games they should win.  The Cats meanwhile face another tough opponent with a wounded Fremantle heading to Simonds Stadium next Saturday night, but this was an improved performance from Geelong and they should go into that game a strong favorite.