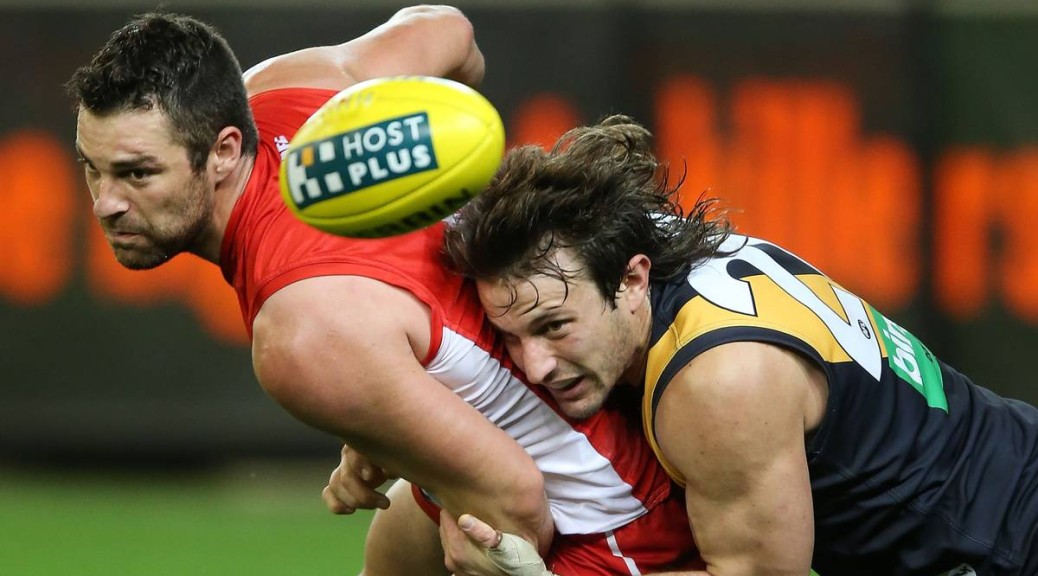 It seems sometimes fairytales do come true, even for the formerly finals cursed Richmond Footy Club.  The Tigers, incredibly, won their 9th game in a row by defeating minor premier Sydney in Sydney on Saturday evening, and after starting the season with 3 wins from their first 13 games are officially finals bound.  It got off on the right foot for the Tigers before the game even began, the Swans doing exactly what they said they wouldn’t in pulling out another of their stars in Buddy Franklin to rest him before the finals next week.  Already without Josh Kennedy, Ben McGlynn and ruckman Mike Pike it made the Swans seem considerably less scary and no doubt put the scent of blood into the Tigers nostrils who would have sensed their opponent were much more worried about next week than the contest in front of them, and predictably that’s exactly how it began.

The Tigers dominated a lackluster Sydney early, kicking the first 5 goals of the game before the Swans had mustered up a yelp – Jack Reiwoldt kicking 3 of them.  Perhaps wary that a big loss could cost them top spot the Swans eventually mentally engaged and started to get the game onto their terms, kicking the last 2 goals of the first quarter to reduce what had been a 33 point Richmond lead down to a more manageable 20 at the first change and 13 at the half.  When Gary Rohan kicked the first of the third quarter just a minute in it seemed that the inevitable might happen and the Swans would roll over the top of the Tiges to win going away.  But not this Richmond group, they’ve got heart and fight and they displayed plenty of both in a pulsating second half.

In the end it came down to a few key moments deep into the last quarter to decide the September fate of the yellow and black.  First with the Tigers clinging to a slender lead in the last 10 minutes of the game the Swans spent several minutes dominating the ball in their own forward line, they had multiple shots on goal but wasted all of them, kicking 4 points in a row to bring the lead back to 2 points.  As so often happens the Swans would be punished for their wastefulness, the kick out from the 4th successive point falling fortuitously for Shane Edwards who banged it on his boot to a one on one contest between Tiger Dustin Martin and Swan Ted Richards on half forward for the Tigers.  Richards committed the cardinal sin for a defender and went to ground, Martin ran onto the loose ball and bounced his way inside 50 before steadying and burying the goal, and with it the Swans.  The Swans got one back a few minutes later through Sam Reid, but the Martin goal gave them the breathing room they needed and only enhanced his reputation as a great one on one player in the forward half.

As the Swans advanced relentlessly in the last couple of minutes there were more Tiger heroes, Alex Rance and Troy Chaplain both taking key saving marks, Ben Griffiths a huge pack mark on the wing, and Brandon Ellis running down Adam Goodes as the former Swans skipper ignored a teammate to try to get a shot on goal himself.  It wasn’t a great last quarter for Goodes, aside from being caught by Ellis he also dropped a couple of relatively simple marks in goal scoring position that could have made the difference.  He had another poor moment earlier in the game when he blatantly overacted for a high free kick.  Goodes is a champion of the game, a legend of the Swans and by all accounts a champion bloke to boot, but he stages for free kicks far too often, and he needs to stop.  It’s why he’s so often booed in case anyone wondered.

And so the Tigers would hang on, the ball falling into Jack Reiwoldt’s hands after another repelled Swans attack as the siren blew, unleashing a tidal wave of emotion from the Tigers and their travelling faithful.  There were many heroes in yellow and black, but perhaps none were better than ruckman Ivan Maric and veteran Brett Deledio.  Both were inspirational with Deledio amassing 29 disposals and kicking 3 goals, while Maric had an incredible 45 hit outs in a dominant performance against a weakened Swans ruck division.  Skipper Trent Cotchin was excellent as was Shane Edwards, while Alex Rance halted several Swans attacks.  Much was made of the early season absence of Rance and Maric and it’s easy to see why, they provide much of the soul of this Richmond team.  They’ll travel to the Adelaide Oval to take on Port Adelaide in week 1 of the finals, and it would be a brave tipster to tip against them making it 10 in a row.

The Swans were led by their onball division, Dan Hannebery, Kieren Jack, Luke Parker and Tom Mitchell all among the best.  Mitchell will be hoping his 29 possessions and 13 tackles are enough to hold his spot as the Swans take on Fremantle in Sydney next week.  This loss wasn’t catastrophic for them and Richmond clearly had more to gain by winning than the Swans, but coach John Longmire will be hoping they didn’t flirt with their form too much by resting a number of key players this week.

With all the emotion from Richmond’s stirring last couple of months it was hard not to get caught up in it late in the game as they clung on for dear life to a finals spot – one hopes that Adelaide, West Coast and Gold Coast were watching as a team fought tooth and nail to win a place in the 8 that they’d all had at various points and all rather meekly gave up.  Go Tiges.

2 thoughts on “Fairytales and Finals for the Tigers”