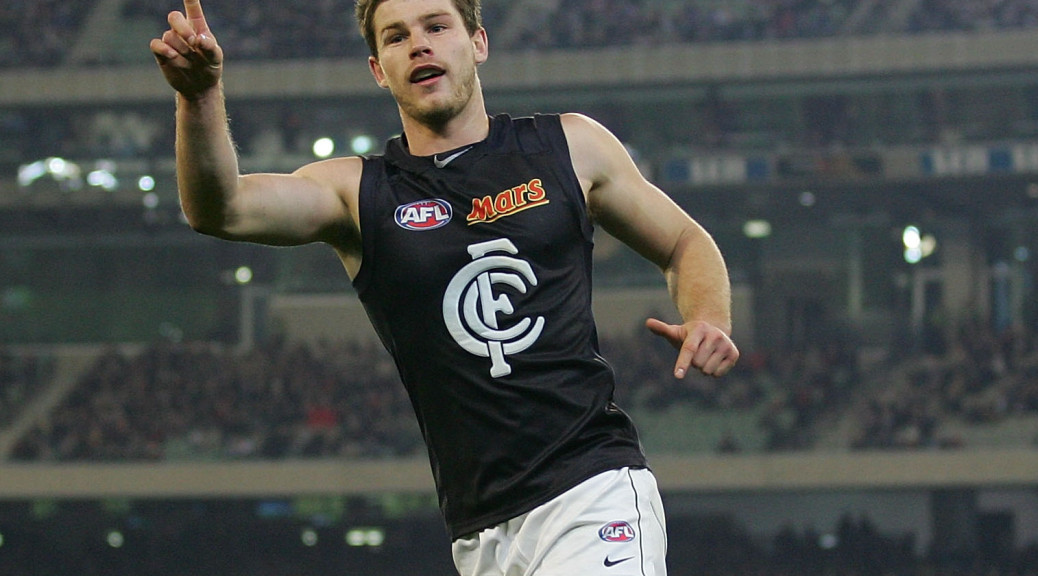 Bryce Gibbs chose to forgo free agency and re-sign with Carlton during the week.  A few months ago that looked decidedly unlikely as the general feeling was he’d explore his free agency options and possibly try to make the move back to his home town of Adelaide.

There’s been plenty of talk about the signing both positive and negative, but staying at Princess Park was the right move for him and a positive for the Carlton Footy Club in our opinion.

It hasn’t been a great year for the Blues.  Truthfully after much promise and plenty of hype it hasn’t been a great two years for them.  Yes they played and won a final last year which was exciting for everyone watching other than the long suffering Richmond fans, but it was all a little hollow after what was a largely disappointing 2013 season.   As we know they only featured in that final after being promoted to 8th on the back of rival Essendon’s relegation after it’s penalties over governance failures were handed down by the AFL prior to last seasons finals.  Even the win itself over another old enemy in the Tigers, while a good performance, had plenty to do with those in yellow and black choking under the weight of expectation (seriously Tiges, maybe next time tell the good folks at Jeep to wait until you’ve won a final before running an ad campaign about being back).

The Blues drew Sydney in finals week two and weren’t disgraced, but the positive end to the season masked issues that had been glaring midway through it.   The Blues, other than champion Chris Judd, lacked leadership.  Marc Murphy is a terrific player but not necessarily the most natural leader of men, that said even if he was he can’t do it on his own.  Leadership these days comes in groups and unfortunately for the Blues they have a void in the key age bracket between 26 and 30 where most of the games great leaders reside.

The key guys in that age bracket include Michael Jamison, Andrew Walker, recruit Dale Thomas, Murphy, Brock McLean and Robert Warnock.  Of that group Walker isn’t a natural leader, Jamison is a super player but has had his injury concerns, Thomas is still finding his feet in his first year in Navy Blue, Warnock is having his best season since crossing from Fremantle but has still been establishing his identity at the club and McLean, whilst a strong personality, isn’t necessarily a walk up start.  Interestingly in that group all of Thomas, McLean and Warnock have come from other clubs, highlighting the void in the Carlton’s recruiting for an extended period some years ago.

It’s actually a fascinating part of the Blues makeup just how many high profile recruits they have managed to sway from other clubs who are currently on their list.  Those three are joined by Judd, Lachie Henderson, Andres Everritt and Sam Docherty who along with Thomas, McLean and Warnock have all been high value prospects at their previous clubs.  Whatever their recruiting staff may have lacked at times in talent identification at the draft table, they’ve certainly been a popular destination for sought after players looking for a new home.

Thomas is the most recent example, and despite much negative commentary around his move I’m a big fan of Daisy.  Easy to forget just how good he was for the Pies before his ankle problems, he’s missed a lot of footy but recent signs have pointed to him being on his way back.  He’s also a great locker room presence and that can be a valuable commodity.  The Blues are paying him a lot, but getting good players from other clubs costs money.  He’ll continue to get better.

Gibbs has been a maligned player at times at the Blues and it seems like he’s been there forever for a guy who’s just 25 years old.  Despite a few weaknesses (who hasn’t got some?), he’s a gun, and he should be coming into his prime.  He doesn’t do everything right and is often critiqued as being an ‘outside’ player, but ‘outside’ players who can kick like Gibbs can are fast becoming vital cogs to their teams in modern footy.  The way the game is now played dictates that good teams need quality run and ball use off half back in particular.
The Hawks set the trend with Birchall, Suckling, Burgoyne and others, the Tigers struggle mightily without influence from Deledio and youngster Brandon Ellis, the Bombers have Goddard and Hibberd, the Swans with Malceski and so on.  Gibbs spends more time around the ball than most of those players, but the point remains.

He has incredibly already ticked over 155 games despite his relative youth and if his body holds up will surely head towards 250+ before his career is over.  The Blues need him to, Murphy as well, and hopefully Thomas.  Judd and Kade Simpson are both great players and strong leaders, but both are on the wrong side of 30.  Matthew Kruezer, Henderson and Chris Yarran are an extremely talented trio but probably all lack a bit of that type-A personality required to lead at a young age.  There’s a vacuum on the field in that mid age leadership bracket, and it’s never more keenly felt than when the side is struggling or a touch flat against a lower end opponent.  The Blues have lost to the Tigers, Demons, Lions and GWS this year, and really they probably should have won at least 3 of them.  3 wins from those 4 would have them on the edge of the top 8, but of course many teams have a similar story.

Murphy isn’t the type of alpha leader who’s going to drag his team over the line himself necessarily, increasing the need for the Blues to be doing it by committee over the next few years as some of it’s younger group move into the key leadership age bracket.  They really need Gibbs and Murphy in particular to fill the leadership void left by Judd’s injury issues and eventual retirement while the younger leaders develop and the other talented kids such as Troy Menzel, Patrick Cripps and Dylan Buckley come on.  Gibbs is a key part of that, and for a Carlton team that’s been lacking a bit of it’s identity this season it’s never been more important.

As for the money, if the reported 5 years $3 million is close to accurate and Gibbs continues on his current trajectory that deal will look like ‘unders’ by the end of it.

So after a rough loss to GWS the week has improved for the Blues.  It hasn’t been a great season at Visy Park, but Gibbs and now Chris Yarran recommitting this week keeps a couple of key pieces in place for the next several years.

Now for a win against the Pies on Sunday night…