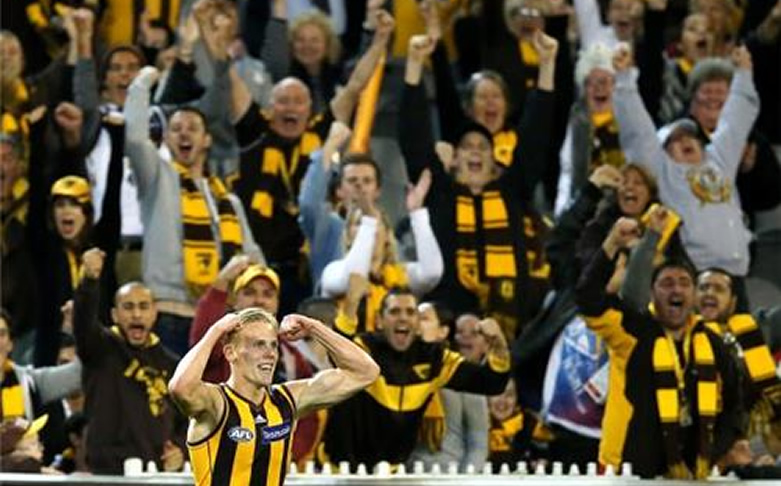 It was a tale of two halves in a battle between two premiership fancies at the MCG last night, the Cats got out to the hot start and led by 31 points at halftime before being completely overwhelmed by the Hawks in the second half.  The Hawks would eventually run out 23 point winners after at one stage kicking 10 goals in a row in a stunning turnaround, Geelong seemingly had no answers once the Hawks got going in a result that will provide some concerns for Geelong coach Chris Scott as the two sides are likely to meet again in the first week of the finals.

The Cats were excellent early.  Led by Mitch Duncan who finished with a career high 37 disposals, Allen Christensen, Matthew Stokes and Travis Varcoe they dominated the early running and probably should have been further in front.  Veterans Andrew Mackie and Corey Enright were patrolling the back half and when Tom Hawkins kicked his third early in the second half to put them 33 points in front the game looked all but over.
Whilst we may have anticipated that Hawthorn would make a run, no one could have seen coming the total control they would have on the game just half an hour later.  From 33 points down early in the third they would be in front by 3 quarter time thanks to a goal on the siren from young midfielder Will Langford, his second in what was probably his best game for the club.  Langford was instrumental to turning the tide in Hawthorn’s favor, and the timing of his performance could barely have been better for those romantics hoping to seeing another Langford excel for the brown and gold in September after the distinguished career of his father Chris.  It’s going to be very hard to keep him out of the team in two weeks time.

Langford was joined in leading the turnaround by Jordan Lewis, Sam Mitchell, Grant Birchall and another making an unlikely run at September action, ruckman Jonathon Ceglar.  Ceglar came in for Ben McEvoy this week and competed hard, taking a couple of key marks forward and kicking a big goal as the Hawks made their run.  Like Langford he’s surely going a long way to keeping his spot for the finals, despite McEvoy being the Hawks big recruit and more fancied option this season.  Josh Gibson patrolled the back half as usual and Brian Lake showed signs that he is rounding back into form after suspension with a strong performance on Hawkins, despite the big Cat booting 3 goals.

In the end amazingly the win was a comfortable one from the Hawks despite really only getting going for a quarter and a half.  Geelong were far from disgraced and had a few key players below their best including inspirational skipper Joel Selwood and livewire forward Steven Motlop, so there’s some upside for the Cats.  Harry Taylor and Jared Rivers had their problems with the tall forwards of Hawthorn, both Jarryd Roughead and David Hale kicking 3 goals a piece.

The loss of key forward Shane Kersten early to a hamstring injury was a blow for Geelong, though Kersten has been struggling to provide an impact in the second tall forward role.  The Cats have had another strong season but do look a tall forward and perhaps midfielder light on the best in the competition, the decisions to move on veterans James Podsiadly to Adelaide and Paul Chapman to Essendon may well come back to haunt them in September.
The only injury concern for the Hawks came in the shape of sweeping backman Matt Suckling who continues to struggle with an ankle problem and was subbed out after half time.  Suckling is important for the Hawks with his precise kicking off half back so they’ll be hoping to get him right going in to the finals.

It was another terrific game to watch between great rivals, hopefully we get to watch these two great teams go at it again in a couple of weeks under the spotlight of finals football.  As Brisbane gun Tom Rockliff said on social media last night…